Ever heard of Sundsvall? Ever wondered what “the new Swedish sound” sounds like? An interview with Delorian of DIE NEUEN SCHWEDEN

Together with the Swedish educational institute SENSUS we have developed an exciting project. End of August we will invite three Swedish newcomer bands to Berlin to show them the fascinating music sights of Berlin, introduce them to relevant players of the music industry, take them to Pop-Kultur and let them perform a gig at Urban Spree under the title: DIE NEUEN SCHWEDEN. The showcase will take place on Aug 26 and is free for everyone!!! For you, to get to know them better, we have interviewed the three Swedish bands. Today we want to introduce Delorian to you, even more than we already have in a past post.

Today, 20th of August, Delorian takes over instagram, but not ours, but NBHAP’s instagram! They will show you in a few posts their personal view of Sweden.

Sundsvall, a small city in Sweden, how is the music scene over there?
Good! There are a lot of great bands that pins out Sundsvall on the map. With bands like The Confusions, Oh My!, Red Mecca, Hemgraven and a bunch of notable metal bands I’d like to think there’s a lot that our home town can be proud of when it comes to music.

What does “the new Swedish sound” sound like? Who are the new Swedes in your opinion?
I think it consists a lot of electronic lo-fi beats and strong voices, like for example Seinabo Sey, Sabina Ddumba, Mapei, Noonie Bao and Tove Lo. There’s also this more experimental, dreamlike soundscape that you can hear in bands like Les Big Byrd, This Is Head and Amason.

You have gotten a lot of attention for your light show/projections. How did you come up with the idea?
Our music can make everything a bit ’’shoegazy’’ sometimes, and we therefore felt that we wanted to lift our live performances with something more.  We also use an instrumentation which makes it very manageable to work with visuals combined to the music, so it felt quite natural to start designing and performing with projections.

What do you expect from your trip to Berlin?
It will be super fun! It’s such an honor to give an international debut in a city like Berlin.

Tell us about your plans for 2015.
We’ve spent the first half in our studio, writing new stuff for an upcoming full length album, and also recorded music videos to two of the songs from “EP. 1”. Further on, our plan is just to come out and play as many live shows as we can! 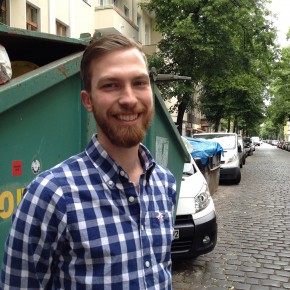