It’s not long anymore until this year’s Berlin Midsommar Festival and the anticipation is growing. In the meantime we met Berlin based rapper and former bartender Lord Pusswhip for an afternoon of mixing cocktails and hanging out. We also made a long interview with him, which you can find here.

We settled down in the backstage area of the Berlin Midsommar Festival venue Urban Spree and set up our experimental bar. We wanted to test his creativity and offered him a bottle of Our/Berlin Vodka, some lemonades and ciders, to drink in-between or to mix. Of course we also got the regular stuff: ice, lime, rhubarb, cucumber, carrots, dill, estragon and Provençal herbs.

The Wesley Snipes: While we invented the first drink, Lord Pusswhip told us about his video of ‘Psychoplasmics’. The heavily drug-laden party video was shot with the cheapest camera you can imagine and definitely features some X-rated scenes. So, Lord Pusswhip and his big brother, who helped him produce the video, did what every good son would do for his parents: produce a “clean” version, without all the drugs. The parents were so proud that the mother just had to share the special edition of his music video on Facebook with the comment: “That’s what our kids do when we’re out of the house!” But, they are big fans. When his album “Lord Pusswhip Is Wack” came out they literally listened to it on repeat, always. When it was done they put it back to the beginning.

For a Wesley Snipes you need 4cl of Our/Berlin Vodka, ice cubes, a single slice of lime, 2 cl of BioZisch Blutorange (but not because of the blood:) and a single blade of estragon, hence the name.

After the first warm up drink we got creative and more daring: the Sonic Super Solstice! As we crushed rhubarb with Provençal herbs, Lord Pusswhip remembered his least favourite food from Amsterdam. BBQ spare ribs with a lot of thyme on top. And we thought that the Dutch could handle their spices.

While we made the last drink of that afternoon, the Finnish Forrest, Lord Pusswhip told us that he played at Sónar Festival and was visited by Yung Lean afterwards. Lord Pusswhip asked Yung Lean for a collaboration. We asked who else he would like to work with and he surprised us with a colourful list of musicians: Miles Davis, Cocteau Twins, Liz, Stereolab (especially with Lætitia, the singer), My Bloody Valentine and Hermeto Pascoal. The list covers everything from Jazz, Rock, Artpop, R&B and even Brazilian folk music.

Pour 4cl Our/Berlin Vodka and find the coldest block of ice you can find. Add sliced carrot and cucumber. Take enough dill (yes, dill:) and put it as whole in the glass. Then top up with BioZisch Matcha. 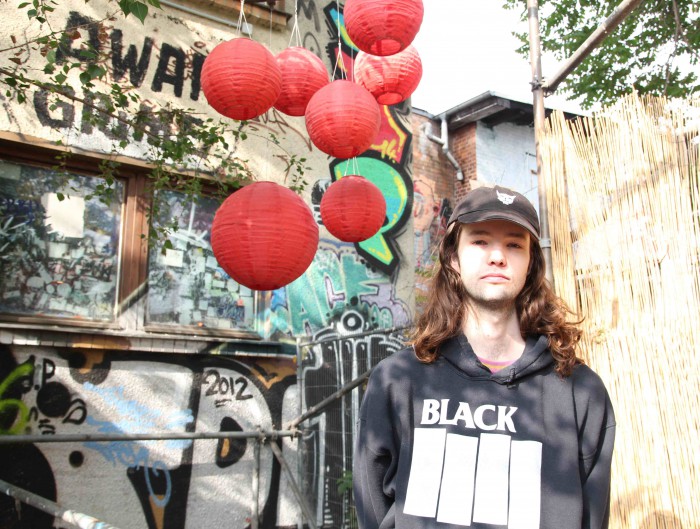