“There is no police in Fufanu world.”

Juice bar is probably not the first place that comes to mind when you’re meeting a rock band. Yet this is exactly where I meet Kaktus (vocals), Gulli (guitar), and Elli (drums) – together, Icelandic rock outfit Fufanu. “Our old studio was close by, so we used to come here all the time. If we eat burgers and drink beer, we’ll just feel tired. We need energy to record and to perform,” – explains Elli after I note that I didn’t expect to see rock stars drink freshly-squeezed juice. Looking back at their live gigs though, this starts to make sense. Fufanu’s shows are an outburst of energy – bold, cheeky, and quirky, with Kaktus running and dancing around stage, climbing up and jumping off things; his vocals drowning in Gulli’s shoegazey guitar; and Elli smashing the drums like there’s no tomorrow.

It all started in 2008, when Kaktus and Gulli were making music as a techno duo under the moniker of Captain Fufanu. Some time later they threw away the “Captain” part, left the machine world of techno behind, and reemerged as a wild punk-rock band, taking both their older fans and critics by surprise. Their debut album as Fufanu “Few More Days to Go” was released in 2015 – a collection of moody, almost post-punk meditations. The debut was followed by “Sports” two years later. In a way, the band turned to their roots, reintroducing more techno and electronica elements into their dark-wave, Joy Division-esque sound.

I meet Fufanu a day before their show at Reykjavik Art Museum during Iceland Airwaves 2017. Both when talking to the band and seeing them perform, I can’t help but notice their kind of unobtrusive self-confidence. They seem to have the air of someone who knows they’re about to conquer the world but at the same time doesn’t make a big deal out of it. In fact, Fufanu just want to do what they like (i.e. make good music) and have some fun times along the way.

I leave their gig the next day with the lyrics from the final track, “Circus Life”, pulsating in my head – “The show must go on” – convinced that for these guys, go on it shall.

NBN: Your press text says that the name “Fufanu” doesn’t mean anything, but that it suits the world that you create. So what kind of world is it? What’s the idea behind it?
Gulli: It’s the world that we create when we make music.
Kaktus: It’s kind of our unique place. You know, when you have a band, it’s quite a unique relationship. It’s hard for us to describe it, but I think it shows really well when we’re playing live. And also on our records. There’s this certain feel to it. There’re no rules, it’s just what it is. There’s no police in Fufanu world.

NBN: The evolution of your music, from electronic and techno to rock – how did that come about?
Gulli: We just wanted to play more live instruments. That was the idea.
Kaktus: Yeah, at the beginning of Captain Fufanu, we were doing all kinds of weird stuff. So doing rock music – it was just kind of stepping out of the computer world, at least for our live performances. In the studio, we’ve always been doing bits and bops with other things. But live, we’re trying out more instruments, and we want to expand, push our limits as much as we could. So that was kind of what was happening. We’re just always experimenting with our capabilities as musicians.
Elli: Actually I think that now we’re going more into the electronic side again. It’s just what we feel like doing. After some time we got really tired of pretending to be rock stars.

NBN: And has your fan base, your crowd been changing a lot in this process?
Kaktus: I think we managed to stick to a good base of our old fans. But I think we’re gaining them back especially now, after “Sports” – particularly those people that were with us with techno and maybe didn’t quite understand the route that we were going. But now they start to understand what that all was: just the same band, experimenting. And I think we’re getting a good new crowd of people that are really into music.

NBN: The name of the album and the lead single, “Sports” – is it a metaphor?
Kaktus: The demo for the song was called “Sports” because it sounded like a sports anthem. But actually we managed to find a meaning in it. Athletes are always training hard to get new personal records, and it’s the same with us. It’s our sport – music.

NBN: How important is the visual image for you?
Elli: Maybe not the most important, but it’s quite important, for sure.
Kaktus: For all the artworks that we’ve done, we’ve put a lot of work and thought into getting them together. Now for our show tomorrow, we’re putting lots of effort into just the visual part of it. We also did it last year. Yeah, we’ve been doing a bit more for the live shows.

NBN: So do you come up with the ideas yourself?
Gulli: Yeah, pretty much, but we’ve been working with other people who have the skills to do it.
Elli: Usually they’re tight friends so they know what we’re up to.

NBN: Speaking of live shows, what makes a good concert for you?
Kaktus: Just to go on stage like it’s our last show.
Gulli: Yeah, and to bring some good energy.

NBN: Do you prefer bigger or smaller venues?
Elli: It can be both. Sometimes it’s really good to play a smaller venue, like last night – it was really small and tight.
Gulli: It feels more like a rock show when you play smaller venues.
Kaktus: I think the music is definitely better on big stages. But we tend to be really good on small stages. It’s just more intimate, more into-your-face. But I think we also manage to bring that a bit to the big stages as well. We’ve done so many gigs in small venues here and there, so that’s what we’re really used to. But going to the big stages, I think we’re doing the same thing.
Gulli: But it can be a bit boring to play big stages when it’s too far away from the crowd.

NBN: Is there a particular show that you look back as the best show of your career so far?
Elli: Last night or something!
Gulli: Yeah, it’s always getting better. Every day. So last night was the best night so far.

NBN: Kaktus, you mentioned in interviews that you lyrics always come from personal experience. Do you feel vulnerable when singing them on stage in front of an audience?
Kaktus: I think it’s more when you’re writing them. I really want to open myself up, but I don’t want to put it directly out there, so I’m trying to do it with some poetry writing styles to manage to do it. With every lyric, I’m always trying to balance. Am I too personal? Am I too cloudy? Am I too impersonal? But no, not on stage. As soon as you’ve got it together and you’re happy with it, than that is done.

NBN: Would you say you have an ambition to become really big?
Elli: As long as we can have fun, keep doing it and it works out, then I think we’re happy…Of course we want our music to spread.
Kaktus: It would be great to put up a great show every night without having to think ‘Oh, is it possible to do it?’ So to succeed maybe in that way, that is kind of maybe the only goal. To be able to put up a good show, always.
Gulli: As long as you’re doing the thing that you like and the music that you like, it doesn’t matter really if it spreads.

NBN: Does rock music have a certain mission in the society, in your view?
Elli: Just the mission to have fun or something. That’s my mission for being a rocker.

NBN: And do you think that rock music as a genre is still able of producing superstars with a mass appeal? Or has it lost the battle to pop, hip-hop, r’n’b..?
Kaktus: I think it all goes in circles.
Gulli: Yeah, definitely. You’ll see, after a year the thing will blow up. It really goes in waves.
Elli: It was like that twenty years ago. In the 90s, the biggest star was Will Smith or something like that. The same thing is happening right now, the same music also. There was no rock’n’roll back then, and It’s the same now – probably even less rock’n’roll.
Kaktus: We just need one band like Limp Bizkit or something to break the wall.
Elli: When a 10-year-old boy starts to make the most popular song as the biggest r’n’b star, I think the balloon is going [imitates a deflating balloon]… Sorry to say that, but it’s true.

NBN: Have you personally been affected by a certain musician or band that maybe changed your perspective on things?
Gulli: I saw Kraftwerk play at Airwaves 2013 and that kind of fucked me up. Best concert I’ve ever seen.
Elli: Yeah, it’s been a huge influence on us. I think that’s our favorite band together.

NBN: Does your music usually come from a happy place or a sad place?
Elli: It usually comes from a happy place, I’d say. If we’re doing something that we like, we’re just smiling and laughing. It’s more fun if you have a good mood, if you’ve had a great day maybe. For me at least, it works like that.
Gulli: Yeah, It’s not fun to make music when you’re depressed. But of course, you can still put some darkness into it. 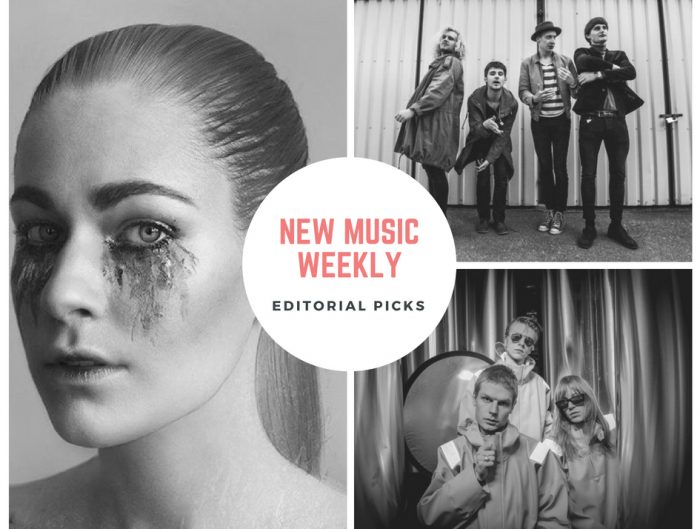